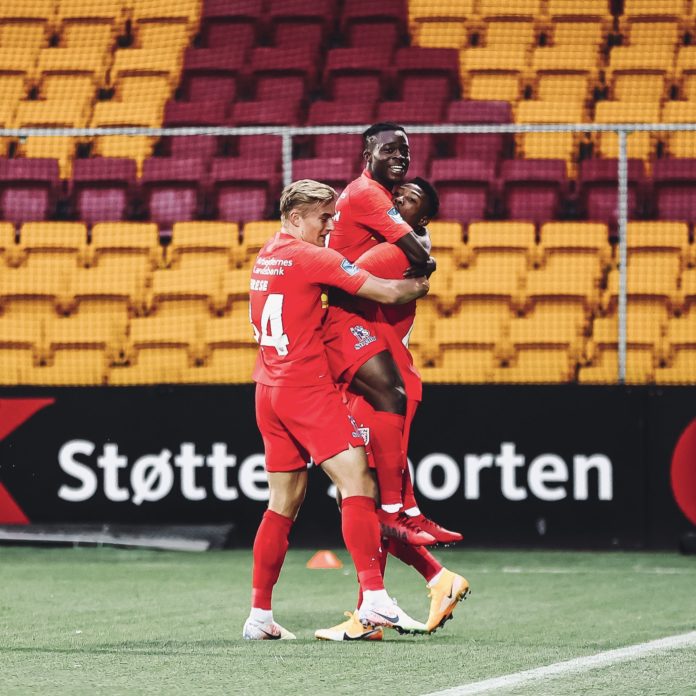 Ghanaian youngsters, Francis Abu and Kamaldeen Sulemana, hit the back of the net for FC Nordsjaelland in their emphatic 4-1 win over FC Midtjylland on Saturday.

Nineteen-year-old Abu scored the game’s opening goal 11 minutes into the game from the center of the box into the bottom right corner to put the Wild Tigers ahead after he was set up by Ulrik Jenssen.

The Danish Champions struck back on the 33rd minute when Anders Dreyer’s left-footed shot from the outside of the box went straight into the top right corner to restore parity.

With one minute left to the break, Abu scored a screamer from outside the box into the top right corner to put the hosts back in front before the interval following a nice pass from Ghanaian-born Ivorian Diomande Mohammed.

Martin Frese smashed home the home team’s third six minutes from the break from outside the goal area after he was set up beautifully by two goals hero Abu on the 51st minutes to put the hosts 3-1 up.

Forward Kamaldeen Sulemana, 18, scored his team’s fourth goal as they thrashed Champions League side Midtjylland 4-1 at home in the Danish Superligaen.

Sulemana has three goals, two assists in six matches for Nordsjaelland this campaign Abu has three goals and one assist to his name in four outings in the Danish Superligaen.