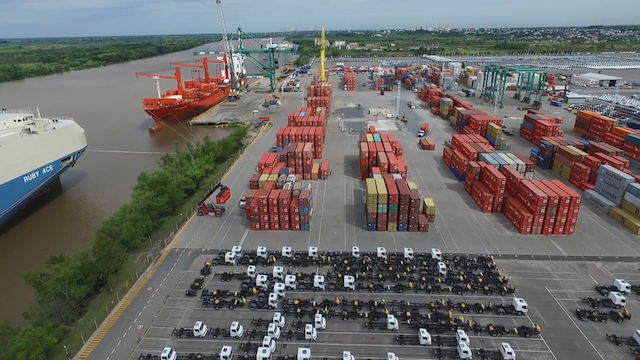 The ruling New Patriotic Party (NPP) has described as a game changer, the policy by the Akufo-Addo government to reduce benchmark values of imported goods and auto vehicles by 50% and 30% respectively.

Addressing a news conference on Sunday, 7th April, 2019 at the party’s headquarters in Accra, the General Secretary of the NPP, Mr. John Boadu praised Akufo-Addo and his government, particularly the Economic Management Team (EMT) led by Vice President Dr. Mahamudu Bawumia for listening to the cries of Ghanaians and reducing import duties for them.

The reduction, Mr. Boadu believes will help ease the burden and hardships on Ghanaians and also reduce the prices of goods in the market for the average Ghanaian.

“To facilitate trade, make our ports competitive in the region, and to further reduce the costs of goods and services even with a single digit inflation, government has introduced a raft of measures at the ports that is ground-breaking,” Boadu indicated.

In explaining the effects of these reductions, Mr. Boadu observed that “the effect of this is that the dutiable value of say a container-load of tin tomatoes which may have been say GH₵100,000.00 attracting say 10% in total fees, charges, and duties of GH₵10,000.00 has immediately become GH₵50,000.00, resulting in lower total fees, charges, and duties of just GH₵5,000.00. This in turn translates to affordable prices of tin tomatoes on the market for Ghanaians of all income groups and jobs for more people along the line etc”.

Mr. Boadu took a swipe at the Minority NDC who have made several attempts to create the impression that the reductions will not impact the net duties paid by importers. In his rebuttal, Mr. Boadu adduced several exhibits, including a testimony by the son of former Deputy Attorney General and an NDC Member of Parliament, Dr. Dominic Ayine to advance his case.

In a Facebook post on Thursdays 4th April, 2018, just a day after the announcement of the policy, Dr. Ayine’s son, Ross Berizaya Ayine stated “I am very impressed and pleased with the NPP and Dr. Bawumia for the reduction in import duties. This is a great move and by far, it is the best policy in governance and in the right direction. God bless all who contributed to this success and to the brain (s) behind this splendid move. I cleared a Honda Civic Touring at GHc31,000 just last week and clearing another under GHc18,000 today. If all successive governments could initiate these kind of policies, Ghana as a country would be a better place to live. Politics isn’t about colours but reality”.

This account by Mr. Ayine has been corroborated by the President of the Ghana Union of Traders Association (GUTU) and his members, as well as several individuals who have cleared cars and goods at the ports since Thursday. The reduction thus appears to be a popular policy that is likely to cause significant reductions in the prices of goods and auto vehicles on the market.

Nduom writes: Out of adversity, a golden key to the future...

Biggest lie of the century – Adongo on payment of locked...