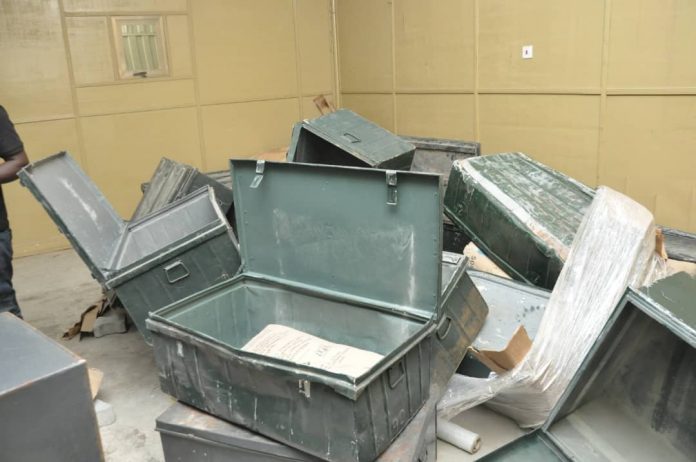 At least 10 suspected scammers have been grabbed in a crackdown carried out by the Defence Intelligence Unit of the Ghana Armed Forces on Saturday in the hilly area of McCarthy Hill in Accra.

They are made up of three Ghanaians and seven other nationalities – two Chadians; Hassam Mohammed 39 years and Daniel Fadel 40 years, a Jordanian; Mohammed Tasil who is 34 years, and a Libyan Mohammed-Sallam-Mohammed who is 50 years.

The rest are: a Burkinabe Mubasil Samfo 23, a Malian Mariam Abdallah and a Syrian – Maharan Zakaria.

Their Ghanaian counterparts, CEO of Global Link Ghana Alhaj Yakubu Yahaya, CEO of ADFAT Alhaji Adam Jibril and Derrick Salome are believed to be the leaders of the syndicate.

The suspects, who work together, inform their victims that they have containers full of dollars belonging to the late Libyan leader, Colonel Muammar Quathafi, and that they want to dispose of them, invite the victims to their offices, where they show them some dollars, and afterwards, come into agreement with them, charging them various sums, after which payment, they ship the supposed dollars to the victims’ addresses.

The scam operators, who are believed to have worked for at least 5 years – due to traces of some bank accounts, some as much as $400, 000 – put 50kg of cement into bags into metal packs, and ship them to their unsuspecting victims’ addresses, to create the assumption of plenty of dollars in the package, meanwhile the dollars would not even accompany the cement bags.

The leader of the group claims he is a Ghanaian from Bawku with parentage from Burkina Faso, but the Ghana Immigration Service (GIS) is to investigate to ascertain that assertion, and at the McCarthy Hills, where his office is, he operates with Syrians, Libyans, Chadians, Jordanians and others, who have all been arrested.

Speaking to the press, after the operations, the Deputy Director, Directorate of Public Relations – Commander La-Anyane intimated that between July and September 2019 alone, over a million dollars has been transferred into the accounts of the scam operators.

Commander La-Anyane further said that, according to the leader of the ring, the last shipment he made, was to Dubai, in the United Arab Emirates, and it passed through Aviance, Kotoka International Airport, so the continuing investigations would seek to unearth all such means through the ports of exits and to plug the loopholes.

As the procedure is, Commander La-Anyane stated, the suspects will be handed over to the appropriate security agency for them to continue with the investigations and then, the appropriate action will be taken.

He further urged the general citizenry, to be observant and cooperate with members of the various security services, by giving timely information to help keep the country in good peace and a secured environment for businesses to thrive, citing that in the warehouse, which the scammers used for their operations, there were a number of Ghanaians working there, as security and others, and they should have informed the security agencies earlier.

Seek wise counsel or we lock up your churches in 48...