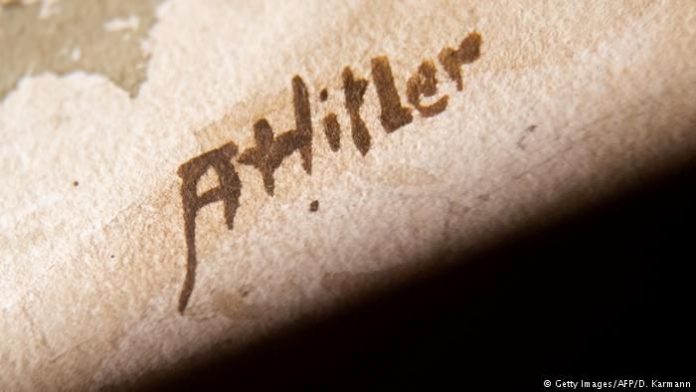 A set of paintings that were attributed to Adolf Hitler have failed to find buyers at a highly controversial auction. The sale took place after a number of paintings were seized on suspicion they were fake.

Five paintings believed to have been the work of Adolf Hitler failed to attract buyers on Saturday, in a sale that was branded as being in bad taste.

The artworks that were on sale all depicted landscapes, with the most expensive — a view of a mountain lake — having a starting price of 45,000 euros ($51,000).

Although none of the paintings were sold, a table cloth and Meissen vase that were thought to have been owned by Hitler fetched 630 euros and 5,500 euros respectively.

A wicker chair featuring a swastika thought to have been owned by the Nazi leader also went unsold.

The sale, held by the Weidler auction house, took place in the city of Nuremberg. Mayor Ulrich Maly described the auction as “lacking in style and taste.”

In the days leading up to the auction, some 63 paintings carrying the signature “A. H.” or “A. Hitler” that had been due for auction by Weidler were seized by authorities because of doubts over their authenticity. Twenty-three of the paintings were due to have gone on sale on Saturday.

An investigation was being undertaken against persons unknown for the falsification of documents with the seized paintings, authorities said. No such probe was deemed necessary in the case of the five works that were offered for sale.

The possibility that the works might not be genuine was brought to the attention of authorities by an expert.

Weidler said in a statement that the fact that the paintings had been withdrawn from sale did “not automatically mean they are fakes.”

The sale of alleged artworks painted by Hitler is a regular source of controversy, with the high prices that collectors are often willing to pay a particular point of outrage.

“There’s a long tradition of this trade in devotional objects linked to Nazism,” Stephan Klingen of the Central Institute for Art History in Munich told the AFP news agency.

“Every time there’s a media buzz about it… and the prices they’re bringing in have been rising constantly. Personally, that’s something that quite annoys me.”

As a young man living in Vienna before World War I, Hitler tried to make a living as an artist. He is thought to have painted some 2,000 pictures, although experts generally say they were of mediocre quality.

In January, German police seized three watercolors of Alpine and Rhenish landscapes that had been presented as Hitler’s works before an auction in Berlin, amid claims they were forged.

The paintings were dated 1910 and 1911, and were set to be offered by auction house Kloss.