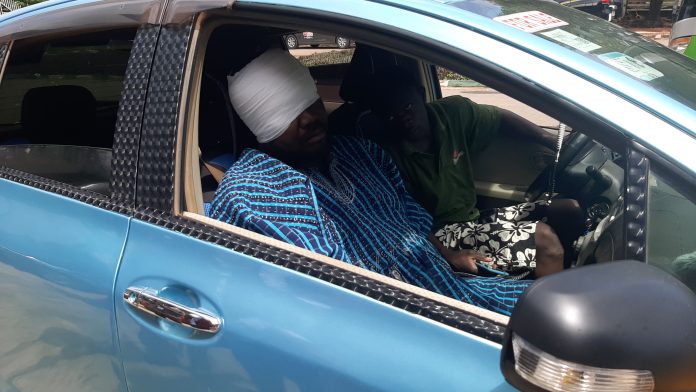 With a bandage around his head and seated in a taxi cab, Kofi Antwi, an English tutor with the Islamic Senior High School has just arrived on campus after being discharged from the hospital.

Wearing a locally made smock, he is here to meet members of the parliamentary select committee on Defence, Interior, and National Security, who are on a fact-finding mission following a police crackdown on students of the school on Monday (June 13).

Antwi has also been detailing how teachers were not spared when armed police deployed to the scene allegedly fired gunshots to disperse the crowd.

“Though nobody wishes for demonstration, the students had a justifiable cause. He [police officer] landed slaps on me, I fell on the ground and he used the butt of the gun on me.

Now if I want to see, it is painful. When we were even going to the police station, I was telling them that I was severely wounded but they didn’t take me seriously. Why should you do that. Some people wanted to come to my rescue and they were arrested. One Inspector Obeng is the one who told them to land the slaps on me,” the victim who has been brought to testify before the committee told reporters Friday.

The chaos in the school saw at least 30 students in the hospital after police allegedly opened tear gas on them while demonstrating over frequent road accidents in front of the school.

According to local media reports, the students had blocked the road in front of their school in the course of their protest over frequent knockdowns.

In their protests, the students lamented that frequent calls for speed ramps have fallen on deaf ears.

Led by its chairman, Kennedy Agyapong, the Committee met managers and students of the school and assured them of getting their grievances resolved.

“I humbly plead with you not to take the law into your own hands. There is an element of truth in whatever decision you took but you went very far. One of your masters cannot even see because of the action you took. The problems you face have been lingering for too long but you should have patience in taking action”, Ken Agyapong said.

But Antwi wants authorities to bring those errant officers to book.

“I want justice”, the teary-eyed teacher said. “Why should students agitate before a speed rump is installed on this road”.