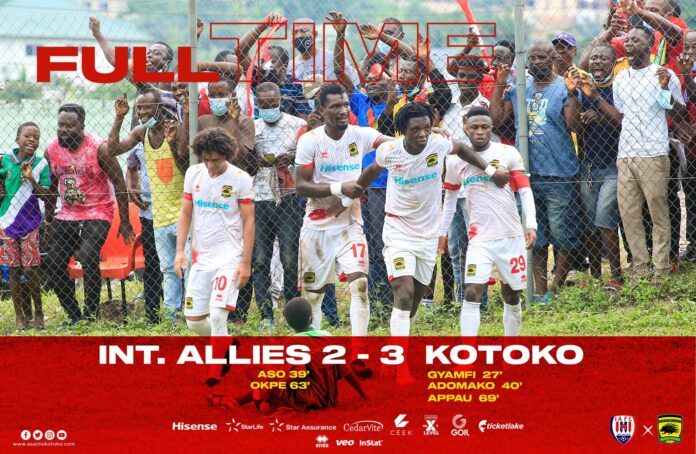 Asante Kotoko went level on points with Accra Hearts of Oak at the top of the table with a 3-2 win in Dawu over bottom-placed team Inter Allies.

Kotoko grabbed the crucial three points on the road in their quest to dethrone arch rivals Accra Hearts of Oak SC but had to play beyond their strengthagainst a highly determined relegation candidate on Monday.

On the 27th minute of the game, a carefully worked attack from the left saw Patrick Asmah bending a cross into the box which Evans Adomako connected his head to it but misses the target as a lurking Emmanuel Gyamfi poked it home with a back heel effort to make it 1-0.

Six minutes to the end of the first half, Inter Allies drew level with Alex Aso capitalizing on a loose marking in the box to tap home to equalizer.

On the 40th minute mark, Evans Adomako restored Kotoko’s lead with a beautiful close range finish following a cross from Gyamfi to make it 2-1.

Goalie, Razak Abalora saved Richmond Lamptey’s lobbing effort with a super dive to keep the score at 2-1 at the break.

Three minutes after the hour mark, Henry Okpe rose highest in the box to power home the equalizer to restore parity for the home team following a corner kick on the 63rd minute mark.

Six minutes later after conceding the second goal and the equalizer, the Porcupine Warriors took the lead again with Andrews Appau grabbing his first ever Kotoko goal and the third for the Red and Whites to make it 3-2 to the visitors.

The game full of intensity with both sides creating good openings but none could find the back of the net again in the game as it finished 3-2 to Kotoko.

Kotoko are now level on points with leaders Hearts of going into the last five matches of the season whiles inter Allies languish at the bottom of the league table after 29 games with 26 points.

Exclusive: Black Stars striker Ekuban out for a month