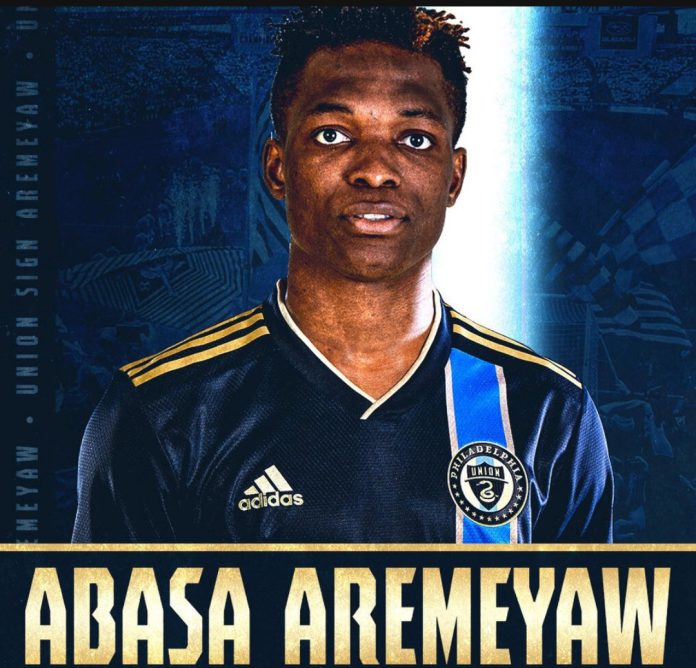 The 18-year-old has signed a two and half years contract with the MLS side and will join the first team for the remainder of the season.

He joined the America club MSK Zilina which is a club based in Slovakia and has got an affiliate football club in Ghana.

Read Full Statement By The Club:

Philadelphia Union announced today that they have signed free agent center back Abasa Aremeyaw to a two and a half-year contract with a club option for a third and fourth year. Aremeyaw will be added to the Union’s active roster following receipt of his International Transfer Certificate and P1 Visa and will occupy an international roster slot.

“Abasa is a promising young player who has the physique and skill to develop into a contributor in our back line,” said Philadelphia Union Sporting Director, Ernst Tanner. “His demonstrated ability to make an impact on set plays, combined with his speed and agility, makes him a good fit in the strong defensive system we have built. We look forward to integrating him into the team.”

Aremeyaw, 18, comes to Philadelphia as a free agent, most recently playing in 2. Liga, Slovakia’s second-tier league, where he played for MSK Zilina B, making seven appearances (seven starts). In 2021, he signed for MŠK Žilina from MŠK Žilina Africa F.C., the Ghanaian football club affiliated to MŠK Žilina, where he made four appearances (two starts), making his debut in a 2-2 draw against FK Senica.

Additionally, Aremeyaw made six appearances (six starts) for MSK Zilina UEFA U19, MŠK Žilina’s Youth League team that competes in the UEFA Youth League competition. During the tournament, Aremeyaw played every minute of each match, playing a role in helping the team reach the round of 16, only falling to Red Bull Salzburg UEFA U19 team in penalty kicks.

TRANSACTION: Philadelphia Union sign defender Abasa Aremeyaw on August 4, 2022. He will be added to the active roster following receipt of his International Transfer Certificate and P1 Visa.

I defected to NPP for better policies – former NDC Organiser