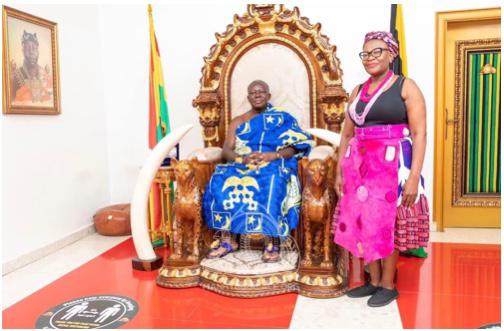 Gushing with excitement, she told this reporter that the Otumfuo told her: “Today consider yourself as a daughter of the Ashanti Kingdom and I expect you to frequent this Kingdom and the palace so that we continue the conversation.”
Earlier, she had told him, in brief opening remarks that, “Never in my wildest dreams did I ever imagine that one day, the revered Ashanti Kingdom that was part of my school curriculum will be my host as the diplomatic envoy of Namibia. So I stand in complete awe, utmost respect and admiration for the symbol of unity and power of the Ashanti Kingdom.”

Namibia and Ghana go a long way back during that country’s struggle for independence from Apartheid South Africa. On the attainment of independence, Namibia received considerable assistance from Ghana in the form of police, civil service and other aspects of modern governance.

Ghana was amongst the very first countries to recognise the newest African nation at the time, 30 years ago. The relationship has been built upon by successive Ghanaian and Namibian governments.

The envoy said, “His Majesty’s stewardship is followed and revered by millions beyond the shores of Ghana and the continent. Millions of African women today continue to drink from the fountain of heroism of the founding mothers of the Ashanti Kingdom.”

Namibia, like Ghana has many ethnicities with strong traditional leaders, a reality that would not have been lost on the envoy when she appeared before the Ashanti King.

In conveying “the warm and brotherly greetings from His Excellency Dr. Hage G. Geingob, President of the Republic of Namibia” to the Otumfuo, she added that, “I represent a country that has long-standing relations with Ghana. During Namibia’s struggle for independence, Ghana, including the Ashanti Kingdom opened its heart and doors to our youth to study. Today, these former students are not only running the public and private sector of Namibia, but have organized themselves into the Namibia-Ghana Friendship Association, with the sole purpose of nurturing and sustaining the bond of friendship that were formed then.”

It should be noted that there is a corresponding association in Ghana called the Ghana-Namibia Friendship Association with those same kinds of objectives.
With regard to intra African trade, she told the Asantehene, “Whereas the emphasis of AfCFTA is about movement of goods and services, in essence it is as much about free movement of African people. For meaningful intra Africa trade to take shape, be sustained and benefit us the African people, Africans must interact and visit one another’s countries. In so doing, we shall not only gradually diminish mutual suspicion but embrace one another and build confidence among ourselves…and above all, begin to consume what we produce”, which she said would create jobs especially for the youth. A reality that should drive the content of intra African tourism and African arts and culture.

The Namibian envoy to Ghana is a highly respected diplomat and senior civil servant with some thirty years experience. Before her appointment to Ghana, she was the Permanent Secretary (Chief Director) at the Namibian Ministry of Cooperation and International Relations (MIRCO).

She told her royal host that she followed with keen interest when he delivered a keynote address to the UN High Level Forum on the Culture of Peace in 2020. “His Majesty’s thoughts on the comprehensive nature of peace, and the space that African traditional authorities occupy still resonate. African traditional authorities and chieftainship have an indispensable role to play in continuing to strengthen and preserve traditional and cultural norms in our societies.”

In conclusion, she stated: “Namibia and Ghana have a platform for bilateral cooperation that is serving us well in bringing our two people together for mutual benefit. As the High Commissioner of Namibia, I look forward to strengthening cultural ties between my country and the Ashanti Kingdom and Region at large, especially in the areas of exchange of visits between traditional authorities, youth exchange, tourism, agriculture and agribusiness, mining and ICT”.