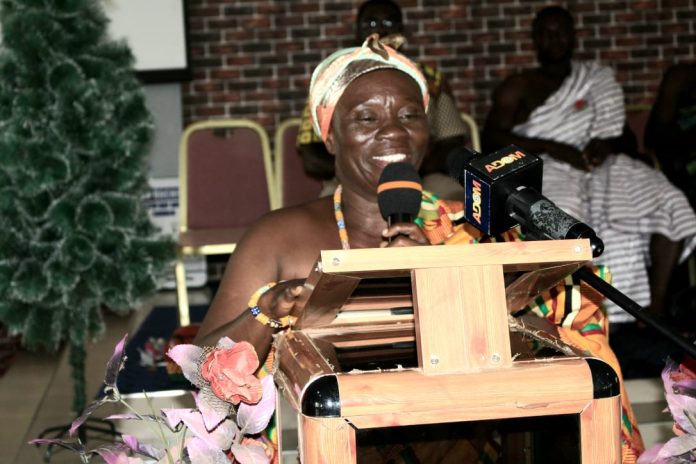 The New Dokyiwa Community JHS School in the Obuasi Municipality of the Ashanti Region has appealed for a computer lab and a well equipped library to facilitate effective teaching and learning in the school.

Established in 2017, the school has chalked a lot of academic successes over the period including scoring 100% in the 2020 Basic Education Certificate Examination which also saw them place 4th among public schools in the Municipality.

At a ceremony organised by the school to handover leadership positions to newly elected student leaders and also introduce the school’s cultural troupe, the Headmistress of the school Veronica Nti appealed to stakeholders in education to put up library and computer lab for the school.

She said the lab will help to offer hands-on training and hone the digital skills of the pupils to prepare them for the future in the spirit of the national and global digital agenda.

Although the school has some computers, the headmistress says, they have no place to keep them.

She also used the occasion to remind benefactors within the Municipality that the school needed a library to inculcate the habit of reading in the children to help improve academic outcomes.

Describing the impact of a lack of a library in the school, Madam Nti said the kids took a larger interest in playing and other activities outside school hours and days as there was no place to learn or read.

Currently, the student population stands at 70. This, a teacher of the school, Dennis Adom Oteng described as worrying.

” To make school going attractive to children in the New Dokyiwa community, we want to leverage on programmes like this handover ceremony and cultural display for the children to recognise the relevance of education, inculcate the spirit of nationalism and for them to appreciate democracy and their culture”.

He attributed the dip in student enrolment and absenteeism to lack of interest in education and poverty. He said though the school feeding program has helped in bringing the children to school, he appealed to government to expand it to capture more of the students.

The Assembly member for the area Daniel Osei lauded the school authorities for rekindling the interest of children in the area through such programmes.

He pledged the support of his office and Nananom to make sure issues of school drop out is nipped in the bud.

The people of Dokyiwa were officially resettled into their present location by AngloGold Ashanti in November 2012.

This was as a result of the short and long term effects of waste from operations of the AGA on the people in the area who were predominantly farmers.

There are currently over 1000 people living in the community.