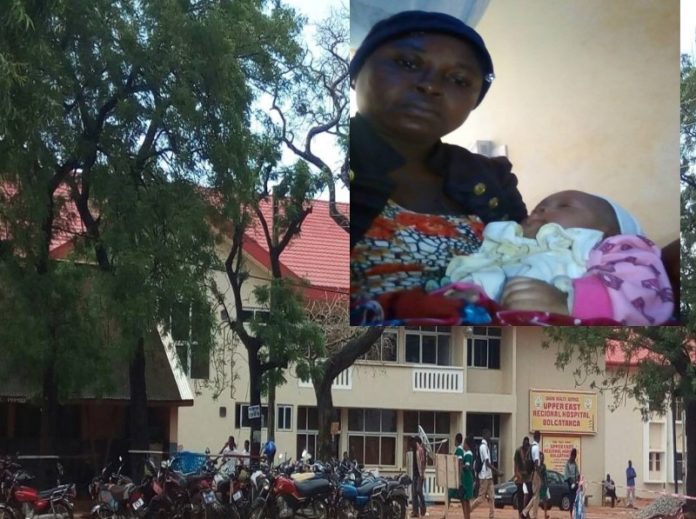 The management of the Upper East Regional Hospital has reacted to claims made by a mother that an alleged delay on the part of the hospital led to her baby developing a clubfoot (a twisted foot) and an unstable neck.

Gladys Ataabo told Starr News she had visited the hospital whilst in labour in June, 2019, and had to press the facility to carry out a caesarean section on her as she coped helplessly with protracted labour for days. The doctor who was to carry out the surgery looked cheerless as she was being led into the theatre, according to her.

She also alleged that about a half of the placenta was left behind in her uterus after the surgery had been performed, forcing the theatre to reopen the sutured tummy to remove the remaining placenta. The baby later developed hydrocephalus— a condition the mother, however, did not blame on the hospital. The poor woman says she has so far spent several thousands of Ghana cedis at the Tamale Teaching Hospital and the Komfo Anokye Teaching Hospital combined to save the ailing child and she has continued to suffer sleepless nights as the boy’s condition has seen no improvement yet.

When Starr News contacted the hospital’s Administrator, Zakariah Yakubu, on the allegations before the story was published, he said the hospital’s management would investigate the reported case and provide a response. And in the promised rejoinder, a copy of which was forwarded to Starr News by the hospital about 24 hours after the story had been published, Dr Samuel Aborah, who currently acts as the hospital’s Medical Director, said the baby’s condition could not be blamed on “perceived delay” at the facility.

“In the said interview, she seeks to suggest that her ‘syndromic’ baby was as a result of improper handling by the [hospital’s] Mother and Baby Unit. We appreciate the pain Ms Ataabo Gladys is going through to ensure that her baby stays alive and healthy. We pray she gets support to continue the required procedures. However, we totally reject the story that suggested perceived delay was to blame for her predicament. We reject in the strongest terms any attempts to misapply the above facts and draw us into any blame game,” said Dr Aborah in the rejoinder.

The hospital also was dismissive of the mother’s claims that there was a hangover of the placenta in her uterus after the caesarean section had been carried out.

“The maternity unit runs a 24-hour service and so a vacuum cannot be created because one doctor’s shift has ended. The demeanor of the doctor is the subjective interpretation of the patient which had no bearing whatsoever with the eventual outcome of the surgery. The suggestion that the doctor left behind half of the placenta inside the uterus is false. The surgery was uneventful.

“The labour was monitored until at 3:50pm when a diagnosis of delayed 1st stage was made and informed consent was obtained for an emergency caesarian section. The caesarian section was not done at the request of the patient. We duly followed our protocols. Patient did not complain, suggest or [develop] hematuria (blood in urine) and so no doctor could have told her that it was normal in pregnancy. The syndromic features i.e. hydrocephalus, spina bifida and clubbed feet cannot be as a result of delayed surgery. This cannot be supported by any available theory [or] literature,” the rejoinder stated.

One-and-a-half-year-old boy drowns in a well