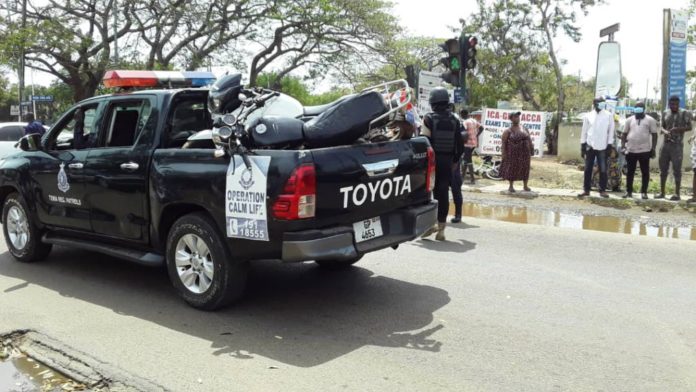 The Ghana Police Service has been detailing how two suspected robbers were killed by its personnel in Tema on Thursday, April 23, 2020.

A statement issued by the Service said the incident occurred at about 12:30pm when the victim had gone to the Tema Branch of the Zenith Bank to withdraw an amount of ¢12,345.00.

The victim, was later attacked at the TDC traffic light, minutes after completing the transaction at the bank. Amid firing of gunshots the attackers immobilized the victim’s vehicle as they made away with the booty.

Police officers who were called to the scene moments later engaged the robbers in a shootout killing the two instantly while the money scattered at the vicinity.

Witnesses who got carried away by the development scrambled for the money leaving only ¢2,500 which was later salvaged by the complainant.

Investigations have commenced as the police were yet to give full details about the identities of the robbers.