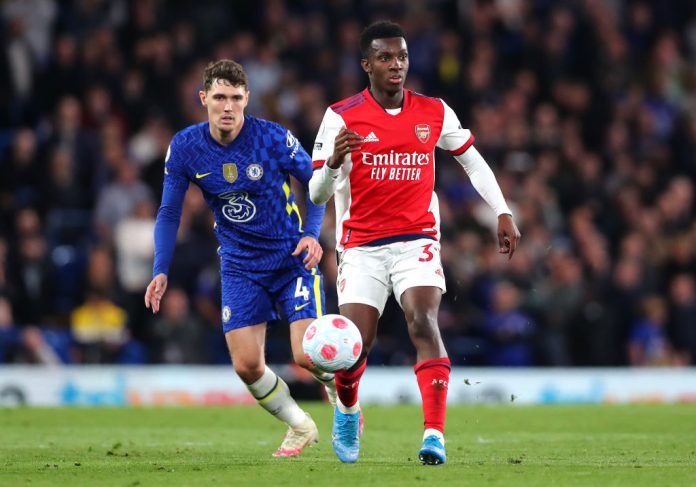 The young man opened the goal scoring to break the deadlock of the match to put the visitors 1-0 up after he pounced on a loose defending by Danish international Andreas Christensen to slot the ball past Edouard Mendy.

He begun to press the Chelsea defenders and the goalkeeper anytime on the ball in the first half hoping to bene from another error.

Soon after his goal, German star Timo Werner equalized for the Blues on the 17th minute mark.

Emil Smith-Rowe restored the visitors lead but Cesar Azpilicueta made it 2-2 before the end of the first 45 minutes of the match.

Twelve minutes into the second half of the match, Nketiah grabbed his second and Arsenal’s third goal when Malang Sarr failed to clear his lines to poke home and put The Gunners back in the lead after 57 minutes.

He played 70 mintues and he was substituted and replaced by Arginine Gabriel Martinelli for the last 20 minutes.

The 22-year-old Ghanaian forward has seven goals this season for the Gunners scoring five times in the EFL Cup competition including a hat-trick and also has two goals in the Premier League all coming against Chelsea.

Arsenal wwon 4-2 with Bukayo Saka scoring the 4th goal from the spot.

He’s on the verge of switching nationality from England to play for Ghana at the senior level.