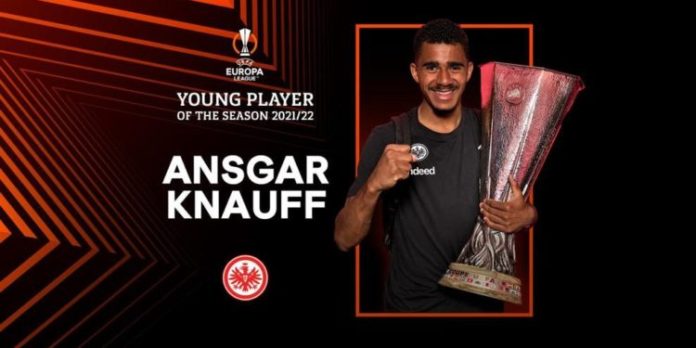 Highly-rated Germany-born Ghanaian youngster Ansgar Knauff has been named the best young player in the UEFA Europa League for the 2021/2022 season.

He played a crucial and pivotal role for Germany Bundesliga side Eintracht Frankfurt to clinch their only second European title this season on Wednesday evening against Rangers FC.

The Borussia Dortmund loanee played the entire 120 minutes when Frankfurt beat Scottish giants Rangers FC in the final on Wednesday after post-match penalty shootouts to win the Europa League trophy to qualify into the 2022-23 UEFA Champions League.

He scored twice in seven matches in the Europa League with one of the goals against FC Barcelona in the quarter-finals 1st Leg.

He also scored a goal against West Ham United at the London Stadium in Frankfurt’s 2-1 on the road in the semi-finals 1st Leg.

The 20-year-old also laid the crucial assist in the semi-final second leg against West Ham.

Knauff is set to stay at Frankfurt for one more season on loan from Borussia Dortmund after impressive season at the club.

He is set to play UEFA Champions League football for the first time next season since the winner of the Europa League automatically qualifies for Europe’s biggest football competition.

He’s eligible to play for Ghana and Germany and recently met with Ghana coach Otto Addo.