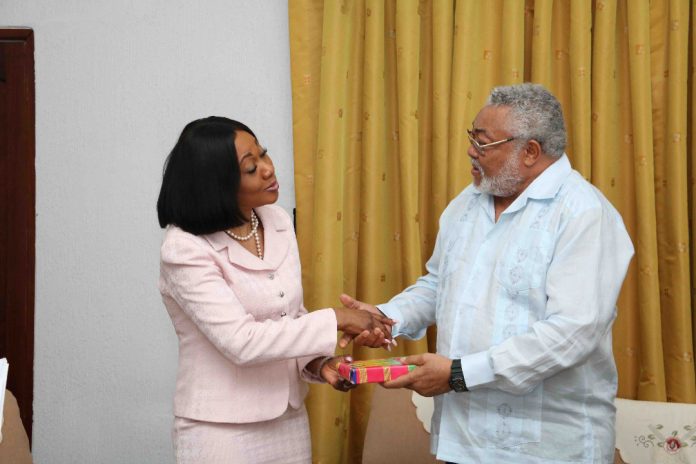 Former President Jerry John Rawlings has called on the Electoral Commission to uphold the sanctity and integrity of the 2020 Presidential and Parliamentary elections, by ensuring that the electoral register is cleaned up.

His call follows reports of missing names and other challenges during the exhibition of the register.

The former President also stated that notwithstanding the good intentions of government to protect the country’s territorial interest and integrity, the recent deployment of the military and other security services that sparked some disaffection could have been done without the passion it generated.

At a meeting on Thursday with the Chiefs of Anlo Traditional Area, former President Rawlings said, he raised these observations when at a recent meeting with the National Security Minister.

The delegation of Chiefs led by the Awadada of the Anlo State, Togbe Agbesi Awusu II who came to mourn the demise of Madam Victoria Agbotui, mother of the former President and a Queenmother of the Anlo State, said aside consoling him, they had planned to visit to express solidarity over the outrageous fabrications, untruths and disgusting historical distortions published in a recent book.

Togbe Awadada said the indisputable integrity of former President Rawlings, his contributions to national development and the dividends of his exceptional leadership is what we enjoy today as the Fourth Republic.

According to the Awadada, the customs of Anlo make it imperative for the Chiefs and Elders of the land to call on their son and the immediate bereaved family to confirm the sad news, offer their condolences and equally use the opportunity to offer special prayers for the departed soul and the bereaved family.

According to Togbe Awusu Agbesi II, emerging developments in the region by a group of people calling for secession and declaring Volta as not part of the Republic of Ghana is not only worrisome but endangers peace and national cohesion and must be discouraged.

The Chairman of the Funeral Planning Committee and the Stool Father of the Anlo State, Daniel Abodakpi, expressed the family’s profound gratitude to the Chiefs for the kind support and for the fact that they had lived through the true history of the role the former President and his government played and will not allow anyone to distort that story.

Former President Rawlings thanked the Chiefs and Elders of Anlo State for their support and wise counsel to bring his mother home for the final funeral rights. He reiterated the need for such a remarkable step and stated, “my grandmother and some uncles would have been buried in Keta but the landlessness or the erosion caused by the sea has claimed many homes and family graveyards. He said he was grateful the construction of a sea defence wall had re-nourished the coastline and brought some form of control to prevent the sea from doing the usual damage of land erosion.

He noted that it was equally his prayer that government will claim more land extending up to Aflao for the people living along that stretch to have access to more land for socio-economic development.  He further stated the essence of sending the mortal remains of elders of the land back home, is to deepen the values and spirituality of the traditional area and called for the protection of such cultural values.

Perpetrators of nepotistic Agyapa robbery will be punished – Asiedu Nketia...