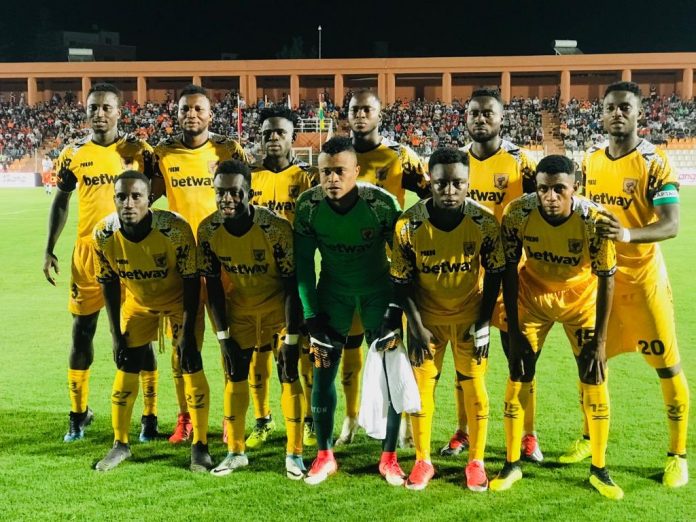 Ghana Premier League side Obuasi Ashantigold have been booted out of the ongoing CAF Confederation Cup preliminary stages by Moroccan top-flight side Renaissance Spotif de Berkane by 4-3 on aggregate after beating the Miners 2-0 in Morocco.

The Black and Yellow went into the second leg with a 3-2 advantage after beating last season’s runners-up in the first leg at the Obuasi Len Clay Sports Stadium.

The Ghana Premier League side were reduced to 10 men just eight minutes in the first half when the centre referee deemed a tackle from defender Musah Mohammed as a red card offence.

Coach Da Rocha and his lads managed to contain the pressure mounted on them by the Moroccans till the half hour mark before defender Issoufou Dayo put the Oranges ahead with a sumptuous overhead kick to give his side the lead.

Zaid Krouch got the all-important second goal on the stroke of half time with a fine finish making it 2-0 before the break.

Burkina Faso international Alain Traore was a torn in the flesh for the Miners backline as he continued to torment them in the second half forcing goalkeeper Frank Boateng into action on several occasions.

Ashantigold were a better side after recess as Appiah McCarthy, James Akaminko and Latif Anabila took total control of the middle of the pitch in a hope of getting the team back into the game but the least said about their finishing the better as most of their long-range efforts went wide.

Both teams created goalscoring opportunities in the second half but none could find the back of the net in a frenetic second half display.

RS Berkane held onto their two first half goals and booked a place in the CAF Confederation Cup playoffs at the expense of Ashantigold.

Though the game ended 2-0 in favor of the Moroccans, the Miners can hold their head high despite the defeat as they gave it a shot to make it to the playoffs and may learn the hard way from this after they threw a two goal lead during the first leg in Ghana before winning by a 3-2 scoreline.