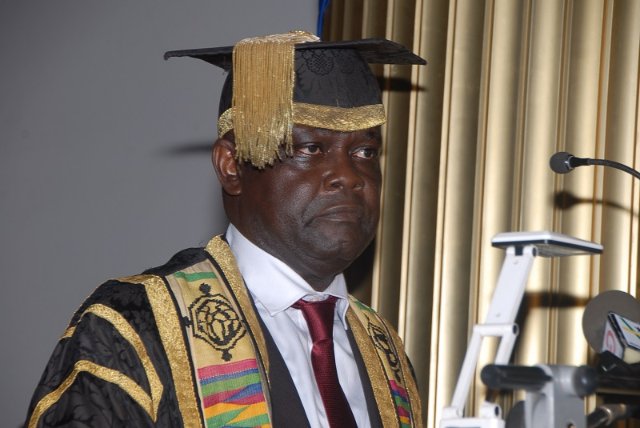 The Vice Chancellor for the University of Ghana, Prof Ebenezer Owusu, has denied allegations of sexual harassment being leveled against him.

The CEO of Africa Integras Andrea Pizziconi, is accusing the university don, but he said they are baseless allegations, adding the lady is just bitter over a contract he refused to grant her company.

“You just have to treat this with the contempt that it deserves…personally, I will describe her as somebody who is bitter and extremely angry,” the VC told Accra-based Joy FM.

“The claims are not true and can never be true. If you know me so well you wouldn’t be asking me that question. It can’ be true. I met her because of the project and I never meet her alone. I have never had any personal engagement with her. All our meetings with this woman has been extremely business one”.
“I have been extremely careful not to have a one on one with her, I have always insisted we meet in teams and she rejected that but I told her my style is that we meet in teams. The last time I met her, she insisted we meet alone in my office but I went ahead to invite my Pro-VC and one other to the office and she was surprised to meet them in my office because she wanted to meet me alone. I always tried to avoid a one on one with her,” he told Starr FM’s Francis Abban on the Morning Starr Thursday.

The Africa Integras CEO wrote on twitter that her company led a US$64mn infrastructure investment at UG which was defaulted upon by the current VC.
“I have remained mostly quiet despite the battery of attacks by Professor Ebenezer Oduro Owusu on my dignity. I was advised not to make waves and definitely not to raise the #metoo flag if I wanted to put the project back on track, which I do. Now I feel compelled to speak up and draw a direct line between this sex scandal and our derailed project,” she tweeted.

But Prof. Ebenezer Oduro Owusu has denied her allegations.

According to him, he has worked hard to get to where is now and his accuser is only targeting his hard-earned reputation.

He said his meetings with her has only got to do with the university stressing all their meetings have been at public places with the leadership of the university and not his home or any hotel.

Be patient! Your roads will get attention – Adentan MCE tells...