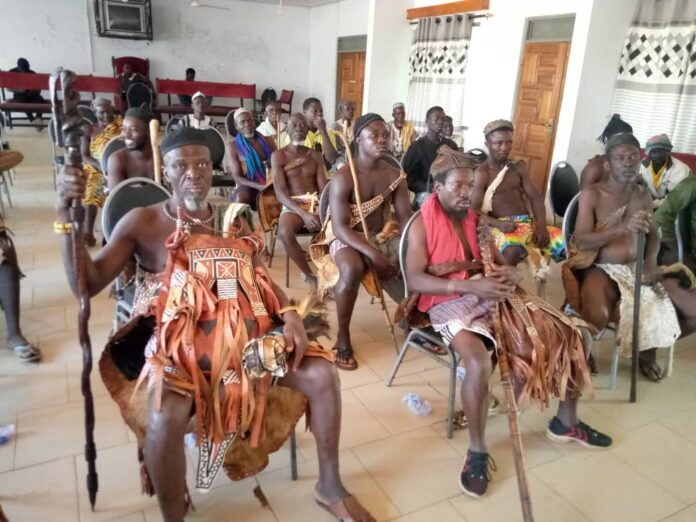 A newly elected Chairman of the Talensi Tindaama Association, Wagbil Bobazaa, has spoken of his readiness to ensure that all lands in Talensi, a mineral-rich district in the Upper East Region, are protected from any form of exploitation.

At 27 years, the new chair is said to be the youngest figure to lead the association he joined after he was installed as a traditional landowner at the age of 22.

Tindaama— a plural word for Tindaan, which means a traditional landowner in Talen, the language spoken in Talensi— are custodians of lands and spiritual leaders in their various jurisdictions.

Wagbil Bobazaa, who is the Tindaan for Tindongo, a community in the east of the district, made this pledge after he defeated his sole contender, Tindaan Togbazaa, at a keen chairmanship election that saw him obtain 19 votes of the 30 total valid votes cast.

Tindaan Togbazaa, who is the traditional landowner of Yinduure, a community in the west of the district, polled 11 votes.

“I humbly ask for your firm support so that together we can successfully fight for our rights as traditional landowners. I am very humbled by the confidence you have reposed in me by electing me as the chairman of the association despite the fact that I am so young. I will ensure that our lands are protected against any form of exploitation. I will not let you down,” said the new chairman.

The association was established in 2014 to put a stop to recurrent mining-related deaths, unapproved takeover of lands, environmental degradation caused by individuals and groups and to protect sacred groves and rivers which serve as shrines in the district.

Tindaan Togbazaa, as the runner-up of the chairmanship contest, is now the Vice Chairman of the association. Clement Kojo Bukari, a retired regional director of agriculture better known as C.K. Bukari, was maintained at the election as the association’s Coordinator. Whilst the Secretary position went to Maxwell Bakevolimah, Isaac Kudoog was voted as the Assistant Secretary and Michael Neebazaa secured the Treasurer position.

The traditional landowners made a joint appeal after the electoral exercise to benevolent corporate entities to support the association financially so it could function as it should. They also underscored the need for unity to prevail among members of the association in the interest of Talenteng (the Talensi homeland).