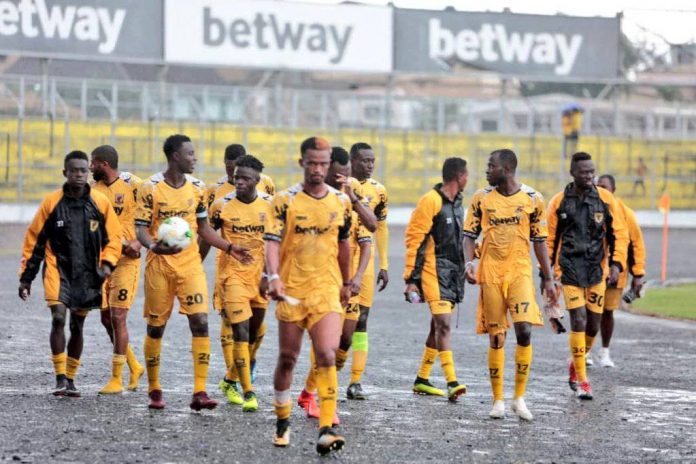 Ghana powerhouse Ashantigold have progressed to the next stage of the Caf Confederation Cup 2019 – 2020 after eliminating Equatorial Guinea giants Akonangui.

The Miners were very impressive in both legs as they managed a 1-1 draw in the East African country, despite the torrid times they went through before slaughtering the heads of Akonangui FC in the second encounter by a whopping 3 – 0 scoreline at the Obuasi Len Clay Stadium on August 24.

Now the big test for the Ghanaians is on, and the question is can the Obuasi lads get past Renaissance Sportive de Berkane from Morocco – a team that came second in last season’s edition of the competition only losing the giant trophy to a more successful side and a powerhouse in Africa and Egyptian football Zamalek.

Without doubt, this will be a defining moment for the Ghanaian side, which once upon a time – 1997 – reached the Caf Champions League final only to succumb to a Moroccan side Raja Casablanca 5-4 on penalties after a 1-1 aggregate scoreline in the two legged final.

Goldfields, which later became Ashgold, won the first leg in Ghana through Sammy Adjei’s 79th minute strike in Obuasi but a defeat in Morocco by same margin meant the game would be decided on penalties after Nazir’s goal in the 78th minute.

Ashantigold lost the prestigious trophy after former Black Stars and Hearts of Oak solid rock at the back, Agyeman Duah missed his spot kick before Fahmi converted his to win it for the North African side.

The Miners have since then faded out of the inter-club competition on the continent and are now competing again in the Confederation Cup for the first time since its inception in 2004 where Hearts of Oak Oak won the coveted trophy for the first time against rivals Kumasi Asante Kotoko in Kumasi on penalties after 2 – 2 aggregate score.

The Gold and Black’s next opponents, RS Berkane – a club on the rise, 2018-2019 Confederation Cup runners up, only the second best to Zamalek in the competition, it doesn’t get harder and trickier than that, a trip to North Africa a test the mighty clubs in West Africa not only Ghanaian clubs have failed in recent times makes it a lot difficult for the Miners.

The Oranges boast of unbeaten home record in the competition in their debut last season and can also brag of a few encouraging away performances and win against Kenya’s Gor Mahia at the quarter finals stage with a vital 1-0 among a few others.

Berkane have over the past years built a very formidable team and not only relying on home grown talents but also the ability to acquire quality players around the continent with vast experience like Burkina Faso international midfield maestro Alain Traore, Kudjo Fo-Doh Laba from Togo who was the top scorer of last year’s competition bagging eight goals in the process.

The Moroccan side offers something different compared to the previous opponents the Miners faced and would be a very tough task for the Ghanaian club to get past with any hope of making it to the last round of qualifiers before the group stages.

Ashantigold must be very alert and be on their guard when they play RS Berkane who without doubt are far better than Akonangui FC and provides a stellar test and challenge which will require a 101 per cent performance from the Ghana Premier League side to stand a chance against last season’s finalist and must win handsomely at home on the 14th of September before the return leg on 27th September in Berkane, Morocco.