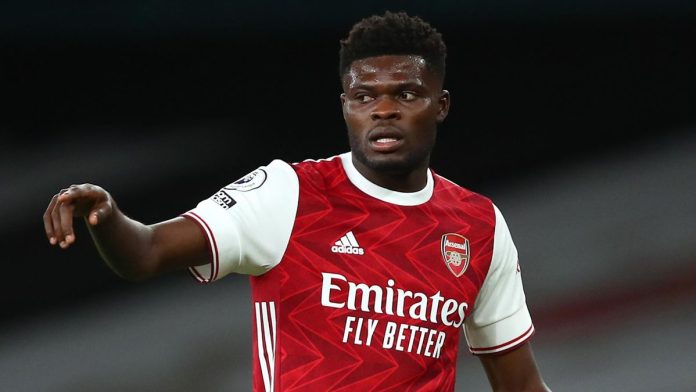 Ghanas Thomas Partey has been named in the match-day squad of Arsenal for Liverpool clash 48hrs after Ghana’s Black Stars AFCON exit.

The former Atletico Madrid star had a horrendous tournament for Ghana in the Africa Cup of Nations tournament in Cameroon as the Black Stars exited the competition at the group stage.

Played played woefully against Morocco in Ghana’s opening day defeat and followed it up with another disastrous performance against Gabon.

The mmidfielder had an average game per his standards in Ghana’s last group game of the tournament but could not help the Black Stars avoid defeat against AFCON New Boys Comoros.

After gGhana’s 3-2 defeat to the minnows from the Island, Ghana bowed out of the competition with just one point and without a win as they finished last in the group.

On Thursday evening, upon his arrival at camp on Wednesday evening in London, the 27-year-old midfielder has been named in Manager, Mikkel Arteta’s team for their game against Liverpool just 48hrs later after playing for Ghana in Cameroon.

Partey ccould play a part in the Gunners Qarabao Cup semi-final clash with Liverpool as a substitute should Arteta decide to bring him on any time in the match.

The mmidfielder was chastised by Ghanaians for a bad performance at the tournament but could be playing club football just two days after a catastrophic display on international duty.

Below is Arsenal’s Lineup: