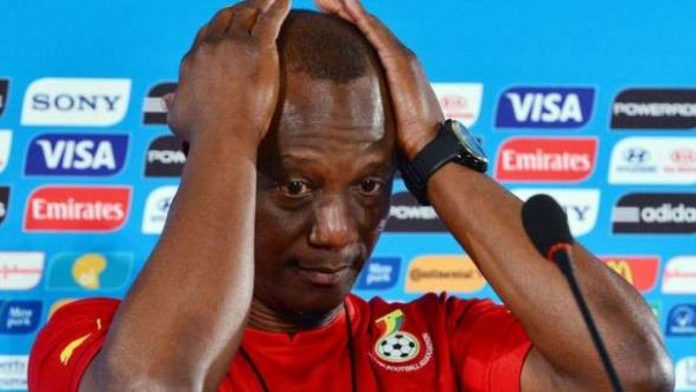 Appiah named his traveling party for the continental finals on Monday, trusting faces old and new. As always, there is debate over who made the 23-man cut but should not have, and who did not make it but should have. However, there is a popular opinion — almost a consensus — that the one man who probably should not be on that plane to Egypt is Appiah himself.

Both of the 58-year-old’s appointments as Ghana boss came with a smaller salary than most expatriates would take, but Appiah also ticked a box that should have afforded him a longer rope; Ghanaians, after all, have clamored for a compatriot to get the job, especially after the failed Avram Grant experiment. The thing about having a Ghanaian at the helm of the national team, though, is that criticism is delivered squarely by his countrymen, no holds barred, but not always fairly — as Appiah has found out.

It has not helped that the former Al Khartoum manager sometimes cuts a flat figure on the touchline, in the dressing room, and in the press zone (not necessarily my view, though). His tactics appear basic and have only paid off in under half (48%) of the 40-odd games he has overseen across two spells. Appiah has been slammed for not having a tight rein on his players, not explaining losses very well, and not garnishing victories in enough flowery verbiage (never mind that he is not much of a talker). Heck, even his matchday dress sense has not been spared (good thing he sticks to team gear these days)!

For a man whose career highlights include a 6-1 thumping of record African champions Egypt en route to becoming the first Ghanaian trainer to reach a FIFA World Cup, though, Appiah gets far less credit than he deserves.

At the aforementioned Mundial, in 2014, Appiah’s team sandwiched two narrow losses with a fiercely contested duel versus eventual world champions Germany; steadier nerves at the start of their group stage campaign and greater focus in the end (which may have had a lot to do with well-documented off-the-field issues in camp that weren’t exactly Appiah’s business) kept the retired defender from making a stronger impression in the dugout on that grand platform. And during the 2013 AFCON — the only other tournament Appiah has steered the Stars at — Ghana was only a couple of penalty kicks away from getting into the final for a real shot at quenching a three-decade thirst for glory.

Appiah does not look the part of a world-class coach, and the brand of football he inspires rarely gets the champagne popping, but he has never been too far from getting it right; on a July night in Egypt this summer, he just might. Still, even if he does, it would change little.

Per the judgment of many, Appiah is the Stars’ weak link: the villain when things do not go well, an afterthought when they do. Despite only having a 1/24 chance of conquest at Egypt 2019, the fault would almost fully be Appiah’s should Ghana not emerge tops, with critics already rehearsing their I-told-you-so choruses about how Appiah sabotaged the Stars’ campaign courtesy the captaincy brouhaha he instigated pre-tournament or some selection/tactic he got wrong at the showpiece itself.

And should Ghana win?

Well, Appiah would be fortunate to get much credit for that. He’d never, ever be good enough, would he?