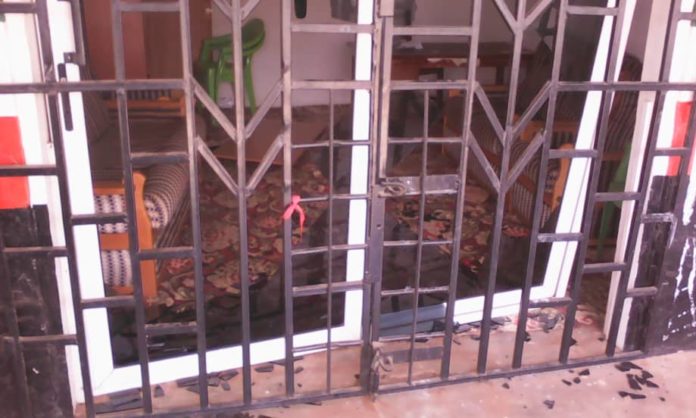 Irate supporters of the opposition National Democratic Congress (NDC) in Yilo Krobo in the Eastern Region have vandalized the constituency office, party officials have confirmed.

The incident happened Saturday, January 18, 2020 at Somanya, where the office is located — compelling party executives to suspend a planned balloting ahead of the party’s parliamentary primaries.

Tension has been brewing in that constituency in recent times as some disgruntled NDC party supporters have been protesting the actions and inactions of some national and constituency officers.

Though it is not clear what triggered this latest attack the angry youth believed to be supporters of one of the three parliamentary aspirants destroyed a number of party items.

Led by the Municipal Police Commander, officers at Somanya were at the scene to maintain calm pointing to planned further attacks.

The office’s sliding doors, computers, party register, cupboards, among others were destroyed by the attackers.

Yilo Krobo NDC Chairman, Mr Narh Agbo, who confirmed the incident to Dailymailgh said he has since reported the matter to General Secretary of the party, Johnson Asiedu Nketia.

“We had a letter from National Executives authorizing us to begin balloting for the three aspirants in the constituency ahead of our primaries. So our constituency executives were briefed of the development and forwarded the election committee to begin the process today. So I was in the farm when my officer called to inform me of what had happened. So currently the balloting has been suspended and I have reported the matter to our General Secretary”, he narrated.

Though no arrests have been made, police have taken over investigations as it mounts search for the culprits.

There has been uneasy calm in that constituency following the disqualification of one Albert Tetteh Nyarkotey to contest the polls alongside two others.

This was after a party member filed a petition for his disqualification from the primaries held on August 24, 2019.

He was however, given the ‘green light’ to contest the parliamentary primaries following a party decision at the national level.

A new date to conduct the parliamentary primaries in the constituency has subsequently been scheduled for Saturday, February 1, 2020.

The result of the vetting process for the Yilo Krobo parliamentary aspirants held on 25th July, 2019 were therefore not declared after the eligibility status of Mr. Nyarkotey was challenged by one Eku Stephen, a branch Communications Officer of the party.

The parliamentary primary in the constituency was suspended indefinitely pending the outcome of Mr. Nyarkotey’s appeal to the NDC’s Conflict Resolution Committee.

A letter dated, January 15, 2020 and signed by the party’s general secretary, Johnson Asiedu Nketia and addressed to the party’s Yilo Krobo constituency chairman, Narh Agbo and copied to the regional chairman, Joe Wak has cleared all aspirants to contest the elections.

“The Functional Executive Committee (FEC) at its meeting on 8th January, 2020 reviewed the matter and decided that all the persons who were vetted are duly qualified to contest the elections,” the letter stated.

GPL Week 5: Check out full list of players who won...

Level of corruption in Ghana high – Ghanaians say in Afrobarometer...

Security beefed up at Asokore-Mampong after Canadian kidnapping