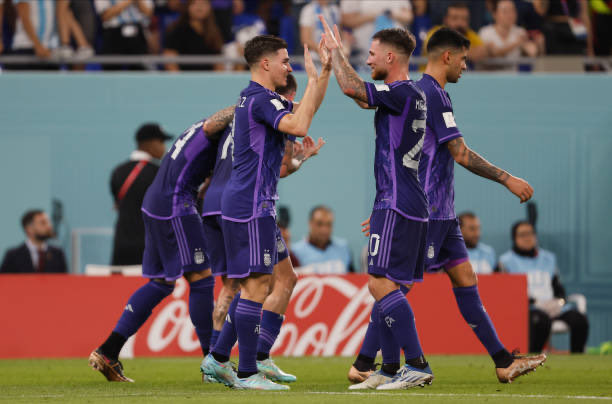 La Albiceleste of Argentina beat the Red and Whites Eagles in their final Group C game to top their group and advance to the round 16 stages of the 2022 FIFA World Cup tournament in Qatar.

Second-half goal from Alexis Mac Allister and Julian Alvarez took Argentina into the round of 16 at World Cup 2022 with a victory against Poland, who also advanced as Group C runners-up despite the defeat.

Poland started the day top of the section but barely threatened against a dominant Argentina, for whom Lionel Messi also missed a first-half penalty, and only progressed to a tie against holders France thanks to Mexico’s 2-1 win against Saudi Arabia in the section’s other fixture. Group C winners Argentina will take on Australia in the last 16.

Messi twice went close in the opening ten minutes, setting the pattern for a first half dominated by Argentina. They struggled to create clear chances, however, Marcos Acuna flashing a shot just past the post just before the half-hour before Wojciech Szczesny denied Alvarez.

From the subsequent cross, however, the goalkeeper was adjudged to have fouled Messi after a VAR review but redeemed himself by plunging to his left and sticking up his right hand to turn away Messi’s penalty.

Argentina did not have long to wait for a breakthrough, however, striking 60 seconds into the second period as Nahuel Molina’s cutback from the right was expertly turned in by Mac Allister for his first international goal.

Kamil Glik headed agonizingly past the post as Poland sought a quick response, but it was Argentina who looked more likely to score again and they duly doubled their lead in the 68th minute, Alvarez collecting Enzo Fernandez’s pass and finding the corner of the net.

Messi and Alvarez both went close to adding a third with Poland unable to muster any sort of attacking threat, and they were fortunate not to concede against as Jakub Kiwior’s loose pass set Lautaro Martinez through only for the substitute to drag his shot wide. The central defender then headed Nicolas Tagliafico’s chip off the line in added time, and that proved crucial for Poland.