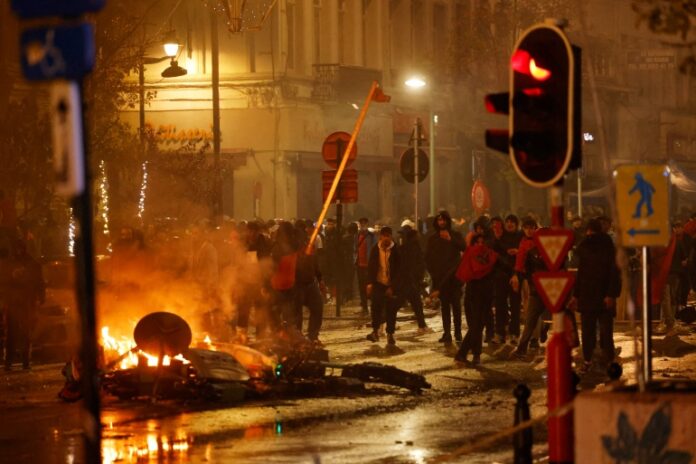 Riots broke out in several Belgian and Dutch cities after the Atlas Lions of Morocco’s 2-0 upset win over the Red Devils of Belgium at the World Cup Sunday.

Police detained about a dozen people after they deployed water cannons and fire tear gas to disperse crowds in Brussels and eight more in the Northern city of Antwerp. Two police officials were injured in the Dutch port city of Rotterdam. By late evening Sunday, an uneasy calm had returned to most of the cities involved.

In response to the rioting that broke out in the city during the game, which saw Belgium lose 0-2 in Qatar, over 100 riot police were dispatched.

Police arrested about a dozen people after using water cannons and tear gas to disperse crowds in Brussels – and held eight more in the northern city of Antwerp.

Two police officials were injured in the Dutch port city of Rotterdam, where riot officers tackled a group of 500 football supporters who pelted police with fireworks and glass.

Disturbances were also reported in Amsterdam and The Hague.

In Brussels, police were forced to seal off parts of the city as they tried to disperse crowds.

Cars were destroyed with bricks with other properties were set on fire, while one person suffered facial injuries, according to Brussels police spokeswoman Ilse Van de Keere.

Philippe Close, the mayor of Brussels, urged football fans to stay away from the city centre and said authorities were doing their utmost to keep order in the streets.

“Those are not fans, they are rioters. Moroccan fans are there to celebrate,” Mr Close said.

“I condemn in the strongest terms the incidents of this afternoon. The police have already firmly intervened. I, therefore, advise against fans coming to the city centre. The police are doing all they can to maintain public order,” Close tweeted.

“I have ordered the police to carry out arrests of the troublemakers.”

There were also disturbances in the city of Antwerp.

Police in the neighbouring Netherlands said violence erupted in the port city of Rotterdam, with riot officers attempting to break up a group of 500 football supporters who pelted police with fireworks and glass. Media reported unrest in the capital Amsterdam and The Hague.

The Belgian mood was in sharp contrast to Morocco, where people spilled out into the streets of Rabat for spontaneous celebrations that included dancing, singing and waving of Moroccan flags, while drivers honked their horns as they drove through the streets.

SC ruling: Your “myopic” comment “shameful”; an attack on ‘democracy’ –...