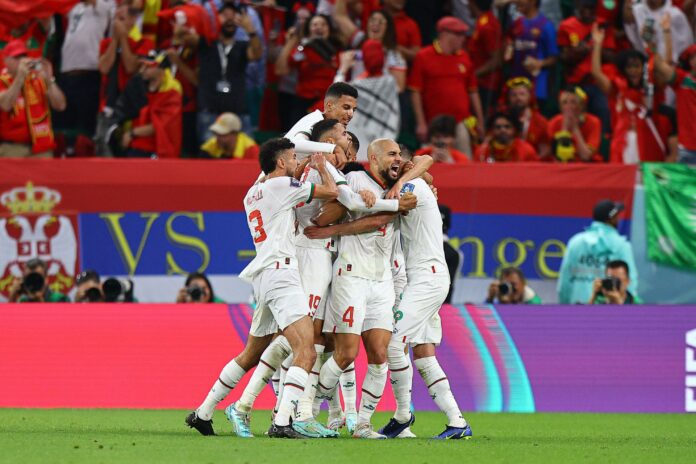 The Atlas Lions of Morocco found its teeth in their second group game of the 2022 FIFA World Cup tournament in Qatar against the Red Devils of Belgium who are ranked second in the world to put one leg in the round of 16 stages of ongoing mundial.

Belgium might not exactly have impressed in their opening World Cup 2022 match, but that 1-0 win over Canada has put them in a strong position in Group F.

Roberto Martinez’s side faced Morocco on Sunday knowing that a victory could secure their place in the knockout phase should Croatia defeat John Herdman’s men from Canada later that day.

Morocco shocked 2018 semi-finalists Belgium with the greatest result in their World Cup history thanks to two second half goals.

Abdelhamid Sabiri’s inspired free kick from a narrow angle, when most other players would have opted for a cross instead of a shot, gave Morocco the suprise lead, and Zakaria Aboukhlal’s chip from a cutback pass from Hakim Ziyech sealed the 2-0 victory over Belgium in stoppage time.

Belgium’s keeper was at fault again for the first goal, put off by Saiss at his near post but still allowing the ball to squeeze in past him. Despite a myriad of attacking talents out on the pitch late on, Belgium did little to worry Morocco before Ziyech broke away on the right to feed Aboukhlal for the clincher in added-on time.

Morocco also overcame the loss of first-choice keeper Bounou just before kickoff after he complained about an eye problem. His replacement Munir Mohamedi acquitted himself well and played his part in a famous win against the Red Devils.

Morocco will face Canada in their next game on Thursday evening as Belgium battle 2018 FIFA World Cup finalist in Russia, Croatia for a place in the last 16 stage of the 2022 FIFA World Cup tournament.