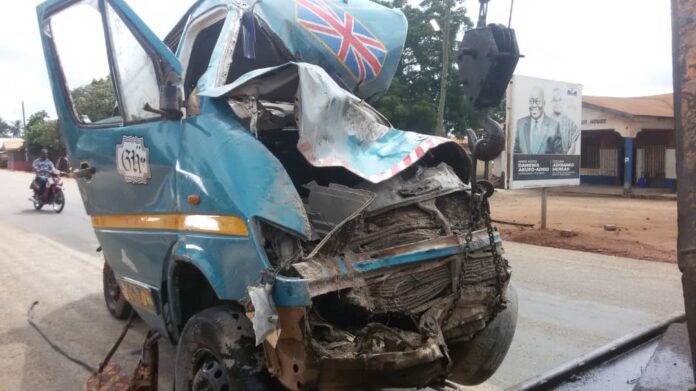 Three people including a two-year-old girl were killed in an accident at Soko on the Tetrem-Boaman motor road in the Afigya Kwabre North District of the Ashanti Region.

Six others are receiving treatment at the St Patrick’s Hospital at Offinso after sustaining various degrees of injury.

The accident involved a Benz tipper truck and a sprinter bus which collided head-on at Soko, about 5 km away from Boaman.

The drivers involved were among the dead. Their names have been given as Kofi Jumah, 37 and one Koduah, 34.

The Commander at the Motor Transport and Traffic Department (MTTD) of the Ashanti Regional Police Headquarters, Supt Emmanuel Boahen confirmed the development to dailymailgh.com.

“There were three people onboard that truck and there was a head-on collision at Soko; and so the two drivers and a minor died on the spot and the other occupants have all been admitted.

Supt Emmanuel Boahen says the MTTD is disturbed with the increasing road accidents in the region in recent times.

He advises road users to respect traffic regulations to avoid such needless deaths.

“We are still in the process to know the exact cause but if any of the drivers were driving with carefulness I think this accident would have been avoided. Because for two cars to collide it means that one of them might have done something wrong…

“We need to observe road traffic regulations with or without the presence of the police”, the police commander noted.

I won’t discriminate against any region – Akufo-Addo