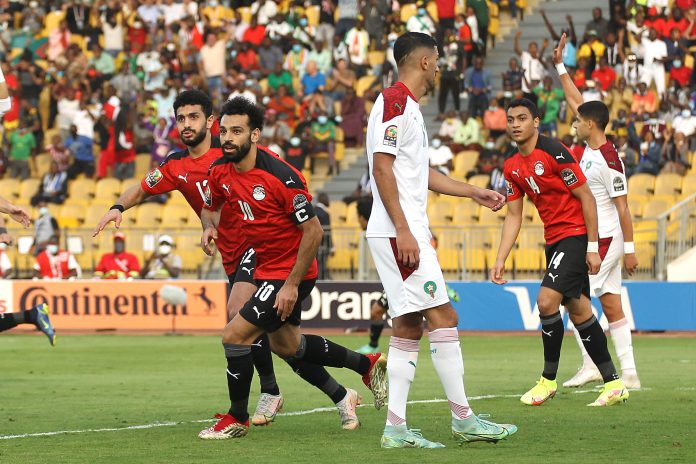 Liverpool star Mohamed Salah carried the Pharaohs of Egypt through the den of the Atlas Lions of Morocco unscathed to send them to the semi-final of the ongoing Africa Cup of Nations tournament in Cameroon.

Morocco got off to the perfect start, when Sofiane Boufal scored an early penalty, his third goal of the tournament, following a VAR review after starman Achraf Hakimi was brought down inside the box.

Ashraf and Ahmed El Fotouh both had shots from distance saved as Egypt looked for a quick response, while Hakimi went close to doubling the lead as he looked for his third free-kick goal of the tournament.

The first half was a fairly balanced game but the Moroccans were a bit more purposeful and created more openings in the opening half of the match.

The Egyptian after the break started firing from all angles and got their reward with 53 minutes on the clock.

Mohamed Abdelmonem’s header from a corner was well saved, but the rebound fell to Salah who had a tap-in into an empty net from a couple of yards out.

Salah’s goal early into the second-half took the match to extra-time, and the Liverpool man provided the assist for Trezeguet to complete the comeback.

Frustrations on both sides boiled over as a challenge from Mostafa Mohamed on Hakimi quickly escalated into a melee involving almost every outfield player with officials getting involved in the act to depict a typical North African clash.

Egypt in particular struggled to keep their heads, furious with a number of refereeing decisions throughout the match with all their three coaches being shown a yellow card.

Morocco came close to restoring their lead only for Abou Gabal to make a stunning save to tip Nayef Aguerd’s header from six-yards out onto the bar to deny Morocco from snatching a winner with just over five minutes remaining on the clock.

Egypt struck the decisive blow on the 100th minutes as Salah ran at Aguerd, worked it onto his right foot and laid a perfect grounded cross across the face of goal for Trezeguet to fire the ball into an empty net to make it 2-1.

The Pharaohs had an opportunity and should have settled it in the dying seconds, as they broke with four players while the Morocco goalkeeper was up for a set-piece, but they made a mess of it and Salah couldn’t divert an effort into the empty net.

Morocco failed to produce any late charge though, having been largely disappointing since scoring that early penalty, as Egypt set up an incredibly exciting last-four clash against hosts Cameroon.

Egypt will face hosts the hosts, Cameroon in the semi-finals, as they look for their first AFCON title since 2010 and their record 8th trophy.