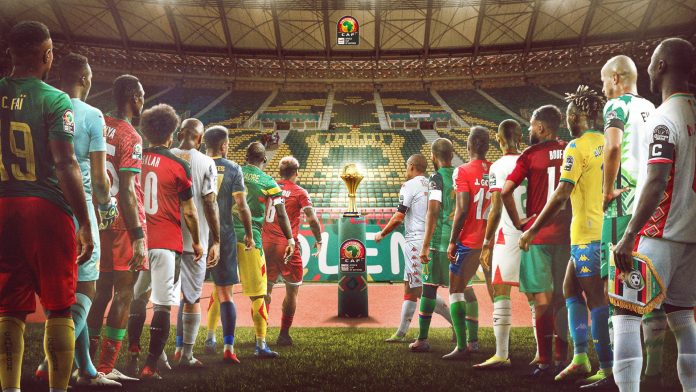 The 33rd CAF Africa Cup of Nations tournament in Cameroon has reached it center-stage as the round of 16 stage is set to entertain and wow football enthusiasts and loving fans across the globe.

The Africa Cup of Nations tournament in Cameroon has been on a two-days break after the completion of the group stages matches on Thursday evening, making Friday and Saturday a day without an AFCON 2021 games.

All is set for the round of 16 stage as all countries have identified their opponents for the matches that resume on Sunday with high hopes of making it into the last eight (quarter-finals) of the tournament.

On Sunday afternoon at the Stade Limbe, the Stallions of Burkina Faso will lock horns with the Panthers of Gabon as they open the round of 16 stage matches.

Gabon picked two draws and a win with Burkina losing one and picking a win and a draw to reach the knockout stage.

Later on in the night, the battle of the Eagles at the Stade Roumdé Adjia will see The Super Eagles of Nigeria battling it out with the depleted Carthage Eagles of Tunisia in search of a quarter final place with Kickoff at 7pm.

Nigeria are the only country to win all three group stage games at the ongoing Africa Cup of Nations tournament in Cameroon.

Winners of Gabon-Burkina Faso will play winners between Nigeria and Tunisia at the Quarter-finals.

On Monday at the Stade Kouekong, the debutants, Gambia will face Guinea Conakry who were warned by their military president to bring home the trophy or return every investment made in them at the tournament.

Guinea beat Malawi, drew with Senegal and loss to Zimbabwe but finished second in the group with four points while the Scorpions of Gambia won two games against Tunisia and Mauritania and a draw against Mali to reach the knockout stage with seven points.

Cameroon registered two wins and a draw scoring seven goals which is the highest in the tournament so far while their opponents, Comoros qualified as one of the best teams to finish third in their group.

Comoros beat Ghana 3-2 after losing the opening two games to make history as they reach the knockout stage in their first major tournament. Cameroon is expected to be a little bit of a tall mountain for the Islanders but for their heroics against Ghana, one could be making a mistake to expect an easy win for the Indomitable Lions.

The Kings of Clean sheets, Senegal will be in action on Tuesday at 4pm against Cape Verde at the Stade Kouekong for a quarter final place.

Senegal, among all the 16 teams have scored the fewer goals, one, at the competition so far but their solidity at the back makes them a difficult nut to crack as they are yet to concede a goal in AFCON tournament.

Cape Verde finished third in group A behind Cameroon and Burkina Faso but will fancy their chances against Senegal, a side that finds it difficult to score.

Later that day at the Stade Ahmadou Ahidjo Annexe, the Atlas Lions of Morocco would have to quench the high burning Flames of Malawi to book a place in the last eight against either Senegal or Cape Verde at the quarter-final stage.

Morocco beat Ghana and Comoros and drew with Gabon and their opponents, Malawi loss to Guinea, beat Zimbabwe and picked a point against Senegal to reach the last 16.

Undoubtedly, the biggest and the highly anticipated clash in the round of 16 stage of matches will be played on Wednesday at the Stade Japoma in Douala at 4pm.

The Elephants of La Côte D’Ivoire will face the Pharaoh’s of Egypt in a top liner with the winner of the tie taking on Mali or Equatorial Guinea in the last eight.

Ivory Coast beat defending champions, Algeria 3-1 to eliminate them and finished as group winners with seven points whiles Egypt had to grind results against Sudan and a lucky win over Guinea Bissau to reach the knockout stage with six points behind leaders Nigeria who amassed nine points.

The game is expected to produce fireworks as two heavyweight come face-to-face on Wednesday.

The last game of the round of 16 stage will see Mali taking on Equatorial Guinea.

The Eagles will fancy their chances against the National Thunder after finishing as group F winners with win over Tunisia and Mauritania and a draw against Gambia.

Equatorial Guinea will definitely not be a pushover for the Eagles after beating defending champions Algeria and Sierra Leone to reach the this far.

Winners of this encounter will face winners of the match between Ivory Coast and Egypt.

The stage is set with a lot of high profile games coming up in the knockout stage between Sunday and Wednesday in Cameroon at the 33rd CAF Africa Cup of Nations tournament.

Ayew Brothers, five others arrives in Ghana ahead of 2023 AFCON...