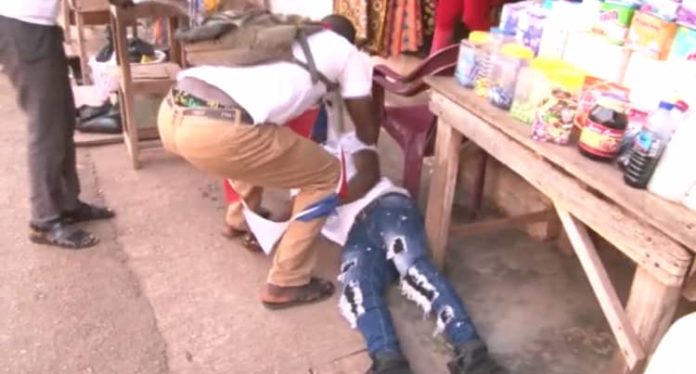 A free-for-all fight on Wednesday at the Asante-Mampong Constituency office of the New Patriotic Party (NPP) has left at least six persons wounded.

Supporters of two aspirants seeking to contest in the upcoming parliamentary primaries had besieged the party office over issues of nomination forms, local media reported

It is gathered, however that a decision by the constituency election committee to reject Mr Addai-Nimoh’s nomination forms escalated tensions.

A viral video on social media sighted by Dailymailgh.com saw chaotic scenes at the party office as the supporters of the two aspirants engaged in a fight as others flee for safety.

“What at all is happening in NPP? This is not the NPP I know”, an eyewitness is heard in the video condemning the action by the group.

Some of the supporters reportedly sustained injuries in the process.

“I earlier told him[Addai-Nimoh] that for security reasons we didn’t want two aspirants to clash on the same day. So I rescheduled a meeting with him on Thursday morning to enable him file his nomination forms. But I was at the office some people numbering about 20 came to the office that they had been instructed to file the forms on behalf of Addai-Nimoh and could have resulted in the skirmishes”, he narrated.

Two persons, according to the chairman, have so far submitted their nomination forms as the deadline nears.

“So far Mr Ben Arthur has submitted his and that was about three days ago. And the incumbent MP has also submitted his”, he said adding, “We have not prevented anybody from contesting the primaries our doors are opened, we should not fall for the propaganda being spewed by some persons out there”.

It still remains unclear whether or not Mr Addai-Nimoh had filed his nomination forms.

COVID-19 CHILL?: Life May Get No Easier For Footballers Until 2022