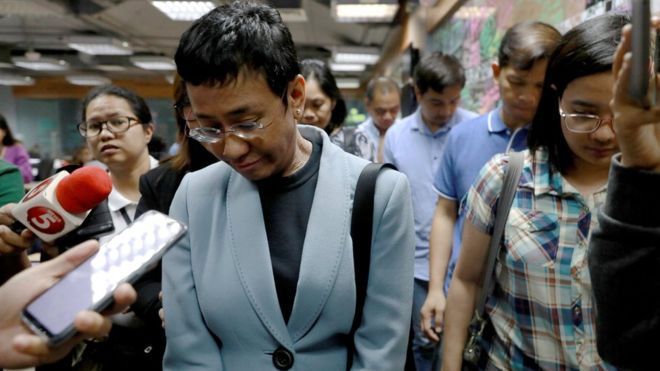 The CEO of Rappler, a news website critical of the government in the Philippines, has been arrested at its headquarters in Manila.

Maria Ressa said the accusation of “cyber-libel” is an attempt by Rodrigo Duterte’s government to silence the publication.

It is the latest in a string of different allegations against her.

The president, who calls the site “fake news”, has previously denied charges against her are politically motivated.

Footage streamed on Facebook showed plain-clothes party officials speaking with Maria Ressa, while several of the site’s journalists live-tweeted what was happening.

Officers from the National Bureau of Investigations (NBI) reportedly ordered them to stop filming and taking photos.

Chay Hofileña, Rappler’s head of investigative journalism, told BBC News that their main concern was making sure Ms Ressa did not have to spend the night in jail.

“Maria is currently at the National Bureau of Investigations, and we’re hoping that she’ll be able to file bail tonight, so that she won’t have to spend the night there,” she said.

“We will have to find a judge at a night court who will be willing to grant bail. Our lawyers are currently in the process of finding one.”

Ms Hofileña added that “if she’s able to post bail, then she’s free” and they could focus on their case and the legal process.