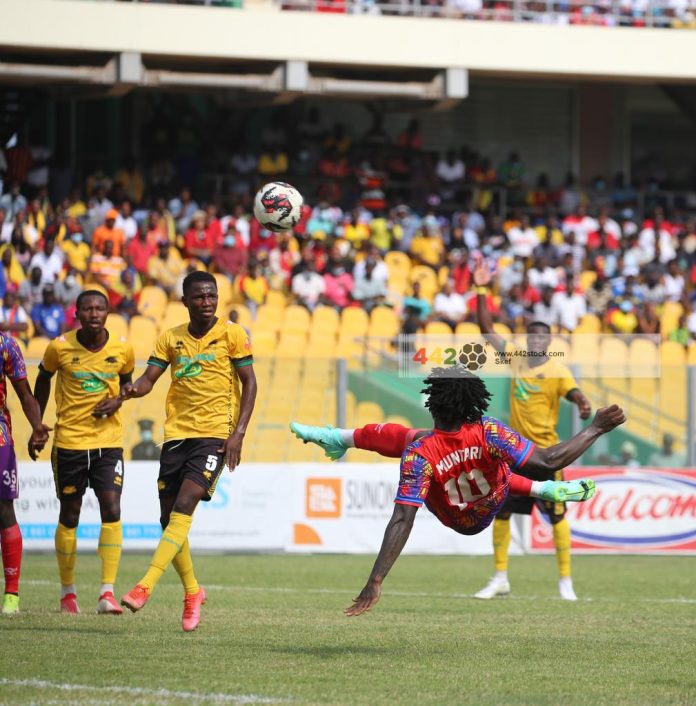 Hearts came out quick out of their blocks and and started firing from all all cylinders to give the Porcupine Warriors something to worry about with their long passes in midfield to the strikers in the attacking third.

The Phobians had the best of chances in the first half of the despite not seeing enough of the ball in the first 15 minutes of the match.

The game became an end-to-end encounter with both teams creating spaces in behind the opposing defenders.

Hearts had the better opportunities to break the deadlock of the match but their attackers fluffed their lines with the clear chances they had.

With just five minutes into the game, Gladson Awako was through on goal and his left-footed shot was saved by Ibrahim Danlad to give the home team a boost.

Kwadwo Obeng Jnr was nicely set up by Daniel Afriyie Barnieh but the attacker could only hit the upright with a glorious chance.

Barnieh and Salim Adams got a good chance to aim at goal but both missed their chances to keep the game at 0-0.

Sulley Muntari had a great chance but his overhead kick went past the crossbar.

Hearts of Oak goalie Richard Attah produced a masterclass save to deny Franck Thierry Mbella Etouga’s improvised strike to keep at 0-0 at half time.

The second half was largely dominated by the Porcupine Warriors who created two great chances in the earlier stages of the second 45 minutes.

Etouga’s header was first saved by Attah who responded well again to save the Phobians when Richmond Lamptey nearly grabbed the winner in the second.

Attah produced good saves in the second half to keep Kotoko at bay to prevent his team from suffering defeat at home.

The pace of the game dropped later on in the game and both sides failed to score the all important goal as it ended goalless at the end of the highly contested game.

Dennis Nkrumah Korsah was one of the brilliant players on the field together with Nurudeen Abdul Aziz and Sulley Ali Muntari while Lamptey and Sherif did a brilliant job for the Porcupine Warriors.

The second round of the 2021-22 season starts next weekend with Kotoko opening a seven points gap at the top of the league table after 17 matches with their rivals Hearts of Oak being 12 points behind them going in the second half of the season.

Hearts will begin the second round with a game against City Rivals Legon Cities FC on February 26.

Asante Kotoko on the other hand will return to Kumasi to host Dreams FC as the second round starts next weekend.

LIFE AFTER COVID-19: Five Things That Could Change